Subcommittee on Environment and Climate Change

Re: Hearing on H.R. 3256, the "Protecting and Securing Chemical Facilities from Terrorist Attacks Act of 2019"

Thank you for holding today’s hearing on H.R. 3256, the "Protecting and Securing Chemical Facilities from Terrorist Attacks Act of 2019."

The Chemical Facility Anti-Terrorism Standards (CFATS) program provides an important framework to ensure covered facilities are taking appropriate steps to be secure. The Fertilizer Institute (TFI) and Agricultural Retailers Association (ARA) represent facilities that are subject to the CFATS program because they manufacture, store, handle, and sell certain CFATS chemicals of interest (COI), such as anhydrous ammonia, ammonium nitrate, sodium nitrate, and potassium nitrate. These important fertilizers are needed to feed the crops that feed the world. Fertilizer is a key ingredient in feeding a growing global population, which is expected to surpass 9.5 billion people by 2050. Half of all food grown around the world today is made possible through the use of fertilizer.

TFI and ARA represent companies that own and operate large manufacturing facilities and thousands of small agricultural retail facilities, the latter of whom provide essential agronomic services and sell crop inputs, including fertilizer, to American farmers. The U.S. fertilizer industry generates more than $154 billion in economic benefit annually and provides approximately 89,000 direct jobs and 406,000 indirect jobs for a total of 495,000 U.S. jobs.

Under the CFATS program, the DHS identifies chemicals which present potential security concerns. As previously mentioned, included on this list are a few fertilizers, including ammonia, ammonium nitrate, sodium nitrate, and potassium nitrate.

The safe and secure handling of fertilizers is a high priority for TFI, ARA, and our members. We actively participate in and sponsor numerous safety and security initiatives, including ResponsibleAg, TRANSCAER, and the Fertilizer Safety and Health Partners Alliance with the Occupational Safety and Health Administration (OSHA).

ResponsibleAg -- which is a joint effort between TFI and ARA -- exists to enhance understanding and compliance by agricultural retailers with a variety of federal regulations, including the CFATS program. Each participating facility receives an initial assessment of compliance with current federal regulations. Any noted compliance deficiencies must be corrected by the facility before it may be designated as certified under the program. The assessments are then conducted every three years.

ResponsibleAg is a voluntary, industry-driven initiative. Since its creation only four years ago, approximately one-third of the industry has signed-up to participate. To date, over 2,602 facilities are registered with the ResponsibleAg program, over 1,334 of these facilities have been certified, 229 auditors have been trained, and 3,044 audits have been completed. Over 70,000 issues have been identified and addressed at facilities across the nation. Our industry is continuously improving its already strong safety and security record. For example, TFI’s 2018 State of the Industry report data shows that we are twice as safe as our industry peers in the chemical manufacturing and merchant wholesaler industries.

In the context of the CFATS program, ResponsibleAg ensures facilities are taking the necessary steps to be secure and compliant with current federal regulations. We believe it is appropriate for industry stewardship programs -- such as ResponsibleAg, which is making positive contributions to the CFATS program -- to be recognized in a reauthorization bill.

As Congress works to reauthorize the CFATS program, we have the following recommendations.

• Maintain CFATS focus on site security. Our facilities are also regulated by the Environmental Protection Agency (EPA), Occupational Safety and Health Administration (OSHA), and other federal entities. Expanding CFATS to include functions handled; for example, by EPA or OSHA, would create duplicative regulations, confusion, and erode focus on the important role DHS has regarding site security.

• Enhance transparency between DHS and the regulated community. For example, DHS recently completed a process for reclassifying facilities. As a result, some of our member facilities were reclassified into a higher risk classification. What was not clear to some our members was the underlying basis for the new categorizations. We believe this should be a more transparent effort between DHS and individual facilities, allowing for a more thorough discussion of the security risks posed by individual facilities. This could ultimately bolster the quality of site security plans.

• Any updates or modifications to Appendix A should be subject to a comprehensive notice and comment rulemaking under the Administrative Procedures Act. We have encountered some confusing rulemaking interpretations, particularly how the program addresses ammonium nitrate and ammonium nitrate mixtures. The uncertainty regarding which mixtures are or are not subject to CFATS has been the subject of many discussions, but thus far has not been resolved to the satisfaction of our members, who have received little explanation from DHS about how they come to these conclusions.

• Facility owner and operators should retain discretion to determine how site security information is shared. We should and do ensure first responders have the necessary facility information to be able to respond to an incident, but that facility information should be handled on a secure platform accessible only to those that need to know.

• The personnel surety program (PSP) should not be expanded to risk groups Tier 3 and Tier 4. This would be an exponential expansion of the program from the less than 200 facilities presently covered to more than 3,500. TFI and ARA recommend that Congress consider making PSP optional for Tier 3 and Tier 4.

Thank you again for holding this hearing and for the opportunity to submit comments on H.R. 3256, the "Protecting and Securing Chemical Facilities from Terrorist Attacks Act of 2019". TFI and ARA strongly support efforts to enact a long-term reauthorization of the CFATS program and we look forward to working with you.

President and CEO The Fertilizer Institute 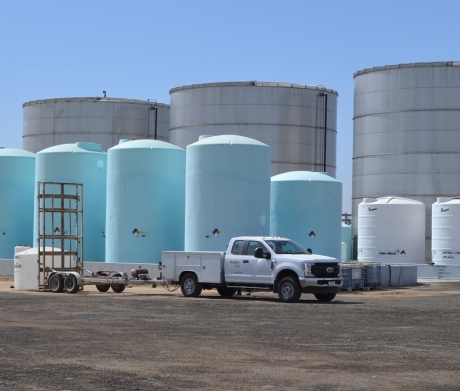